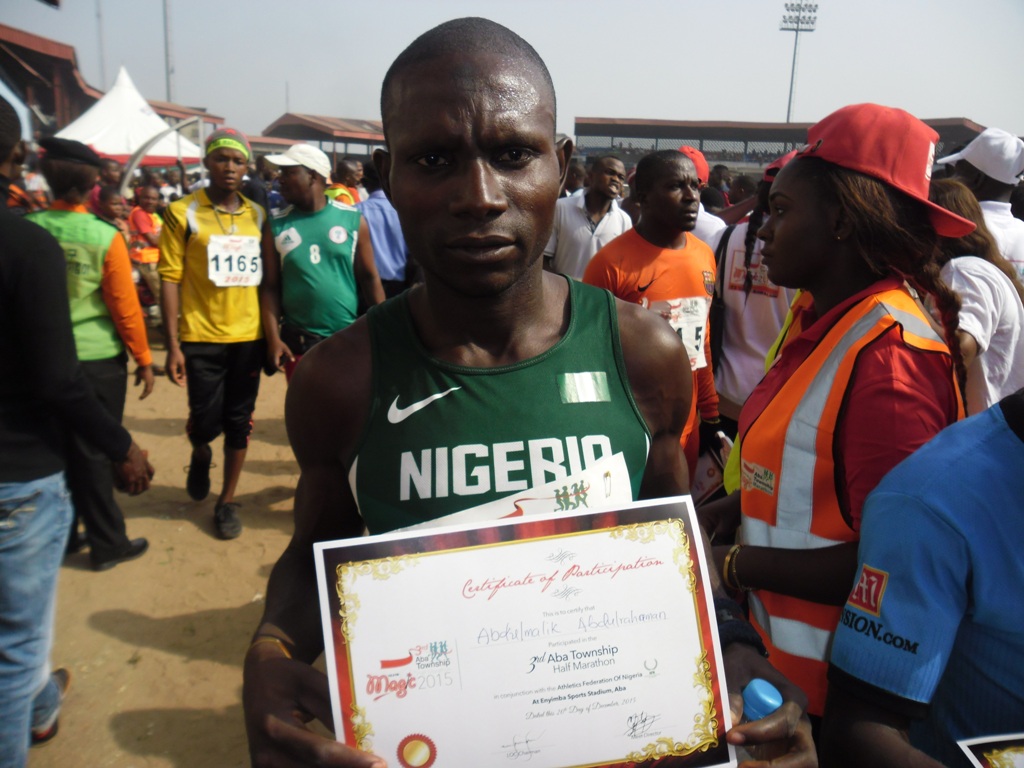 Kogi Sate emerging half -marathon runner, Abdulmalik Abdulrahaman has said he will be shifting his attention to the upcoming Lagos City Marathon.

Lagos City Marathon being sponsored by Access Bank is billed to hold on February 6, 2016 in the commercial capital city of Nigeria. The 42km race is expected to attract top world runners with a  whooping winning cash prize of 50, 000 dollars up for grabs.

Abdulrahaman, who participated at the Magic FM 3rd edition of the Aba Half Marathon, finished 23rd in a time of 1 hour, 15 minutes and 05 seconds in the men’s category on Sunday, December 20.

According to organisers, this year’s edition attracted no fewer than 160 entries including foreign athletes from Kenya, Cameroon and Benin Republic, etc.

Plateau’s Adamu Shehu won the category in a winning time of 1 hour, 07 minutes and 10 seconds after he finished fourth last year While Kenya’s Fridah Lodeba nicked the women’s title in her first race on Nigerian soil.

It will be recalled that Abdulrahaman was participating in his second half- marathon race after Okpekpe 10km Road Race earlier in the year where he finished 32nd in a time of 39 minutes and 45 seconds.

Going forward, the Lokoja-born distance runner expressed delight with his performance in Aba, picking positives from the half- marathon contest.

He said his immediate plans would be to begin preparations to compete well at the Lagos City Marathon which will mark his initiation into the club of full marathon runners, announcing his intentions to undergo intensive training.

He appealed for support and encouragement from the Kogi state government and well-meaning individuals.

“It was a great experience for me. I’m grateful to everyone who had brought me this far,” Abdulmalik said.

“I had really trained hard for this but disappointing I couldn’t finish among the cash prize winners. No matter what, i’m happy with my performance and progress so far.

“I appreciate the organisers for providing me the platform to compete.

“My focus is now on the Lagos City Marathon, it will be my first full marathon where hope to come out stronger next year. I wish to appeal for the support from individuals and the state government for good preparation and sponsorship,” he concluded