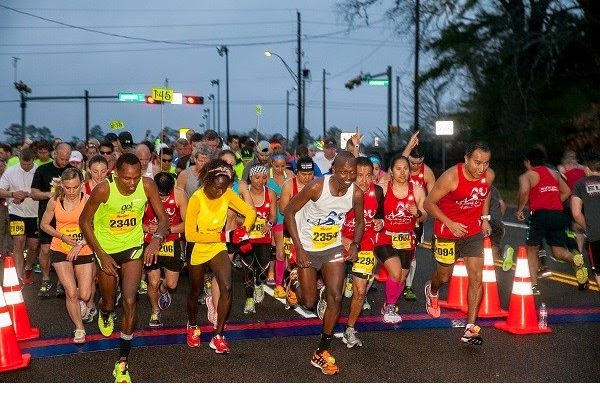 Life is by no means laced with roses for 22-year old Aderonke Olumudi but like the sports she has chosen to excel in (Long distances races), the watch word is never to quit even when conditions are harsh and the ultimate mission is yet to be completed.

Regardless of being the last born in her family, Olumudi admits that her survival is on the race tracks; the long road routes to be specific as she literally fends for herself from the proceeds from competitions she participates in.

It was thus understandable, when Olumudi received the news of the upcoming Access Bank Lagos City Marathon challenge with great excitement as she rightly noted that this will avail her a rare opportunity to exhibit her talent on home soil and more importantly get the much needed financial boost she craves for provided she performs well among the star cast of athletes expected for the upcoming International Marathon.

“I think this is great news having a big bank considering it wise to give back to the community by organising an International full marathon race; this is a great opportunity that I and my colleagues will have to seize and make the best from” Olumudi who has travelled as far as China to run in international marathon races declared.

Seen as a world beater sooner rather than later; albeit with the right motivation and support,  Olumudi who has tasted the two worlds-competing in Nigeria and outside the shores of the country; particularly in the United States says she hopes the organisers of the Access Bank Lagos City Marathon will get it right from the maiden edition.

“The expectations are definitely going to be high so the organisers should brace up themselves for a tough work so they don’t disappoint people” Olumudi enthused.

At the 2012 Accra International half Marathon, Ghana, Olumudi finished in 3rd place in the 21km as she posted a  time of 1hr: 26mins before clinching the Gold at the 2013 Zhuhai International 10km Road race in China when she won in time of 36min:39secs, but finished 10th at 2013 Nanning International half marathon, China 1hr: 24mins: 49sec.

Sadly, Olumudi was unable to travel to China this year owing to financial challenges but she looks up to the Lagos City Marathon which a huge optimism.

Organisers have announced that the winners of both the men and women’s events at the Access Bank Lagos City Marathon will go home with $50,000 each, while second and third place finishers will take $40,000 and $30,000 respectively.

The top 20 Nigerians will also be rewarded win cash prizes starting from N1 million, while the second and third positions will settle for N750,000 and N500,000 respectively.